When I was 20 years old I didn't know how or where to even begin trying to get a gun. For Adam Lanza he probably just went into the living room, opened a cabinet, took out a few guns he liked.

I still don't know where to get a gun and I'm almost 35. I think I need a hunting license or maybe a sports shooting license.

The point is, I'm not interested in guns. And no one around me are interested in guns. But Adam Lanza's mother collected them, she must have liked them. Adam must have grown up in a home where guns where normal day to day business. I wonder what his mother did with all her guns. Defend her home?

It's impossible to understand how someone can do what the shooter in Connecticut did. I cry inside and I think about the grief that must be so hard on the families of the dead children. There are no words to make it better. The world has changed to a worse place for all of the families and for all of us. I hope they get the support they need.

Guns should be banned for all other reasons than hunting. No collecting, no defending homes, no sports shooting, nothing except hunting game. And all wanting the hunters license should have to go courses, get a background check. And no one should be allowed more than one hunting rifle at home.

I read in the comments on CNN's coverage of the shooting that if someone really wanted to kill those children he could use swords to do it. And that's why we couldn't blame guns. Pfff I still blame guns.

Someone else said that they should arm school staff. Yea right. Very Bad Idea.

The USA have to work actively and with a long perspective on lowering the perceived need of guns in the home. It's not about freedom, it's about saving innocent children's lives.

These are the waiting times at my local hospital. I think it is unacceptable. Luckily I'm feeling a-ok.
The regular ER has 4h33m, Children's ER 2:15 and Ob/Gyn 2:40.


I haven't done any ER-clincal rotations yet and I am looking forward to it. But 4 and a half hours! Come on. I think that is the standard wait in the evenings though :(

There must be something that can be done to avoid this!

I found an american software company that has developed a platform that lets people pre-register and check which Emergency Center has the shortest line. It's called Inquicker (their website here).

The general idea is that the patient can pre-register and choose the ER with the best availability. This saves a lot of time according to themselves at least. It seems to be a really good idea. Wonder if it can be implemented in Sweden?

I read this interesting report from ACEP, American College of Emergency Physicians, about over crowding of the Emergency Rooms and what harm it does. The report has number of good ideas on how to reduce crowding in the ER.

We know we almost always have to wait in the ER, but more importantly, why do we have to wait so uncomfortably?

Why not make the wait as tolerable as possible. Put a video game or two up in the room, for the kids (and grown up kids!) to pass the time. Invite a caterer to sell healthy foods so people aren't forced to have candy from the vendor machine. Maybe some silent area and one with TV/Music. Hire someone to make sure that waiting room is clean and safe and that can answer simple questions like... how long is the line, where is the bathroom, can I get a taxi, and such. And why not a giant wooden RAT to keep the kids happy? :)

There was Much Rejoicing - My is Son Eating

My kid took a huge step yesterday in regards of being able to eat by himself. If I put a loaded fork in his hand he ate almost everything that I put on it. Meatballs were the favorite.

It should be mentioned that he has hardly eaten anything besides gruel the last six weeks. So there was much celebration: yey!

My son has always been interested in putting things in his mouth. His favorite thing being dirt. But when it comes to food, there isn't much that will pass that two-toothed gate of a mouth. But this weekend might be a turning point?! Finally he can eat...sort of. 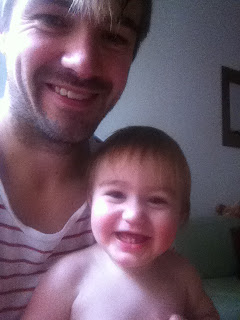 I guess there is an evolutionary advantage with eating with caution. Make it sweet enough though, like gruel, that caution is out the window.

When we were getting closer to one of the exams Professor Cuddles told us that if we were feeling nervous, to just come up to the department and have some coffee. So we could talk about it. Being to nervous "was not good for your tummy" as he put it. Gotto love it :).

On the other hand we had Dr Scare who after every time someone asked a question said: "ok, lets do this ONE. MORE. TIME." Haha. quite funny, but he also said that he was concerned about the performance of this class and that we needed to shape up. And shape up fast!

It's like they were from different worlds. But they both had the responsibility of teaching first semester medical students. Guess they did the good teacher - bad teacher routine?

Uterine Fibroids are quite common in women. Would be in men as well if they had an uterus... hehe. They are lumps of muscle that often grow during pregnancy. They are not bad for you unless they grow to big and/or grow in a bad place. Then they can cause infertility among other symtoms.

A very cool way of removing (or at least shrinking significantly) is the use of focused ultrasound guided by Magnet camera (MRi). No operation required! So there is no need to cut the stomach open and being operated on. Recovery time from abdominal surgery is quite long and there are operative injuries as well.

To "operate" without opening the abdomen is truly Sci-Fi :)

Here is a video with some facts and figures on uterine fibroids. It's 10 minutes of statistics basically... but interesting in the beginning.

Here is a promovideo from InSightec a company making one of the machines. It IS cool that there seems to be even more applications than blasting away uterine fibroids. Breast lumps, prostate cancer and even brain tumors.


And I can't help but to think of the Sonic Tanks that you could build in the awesome game I mentioned last post, Dune II! I found this nice image from the German version of the game. 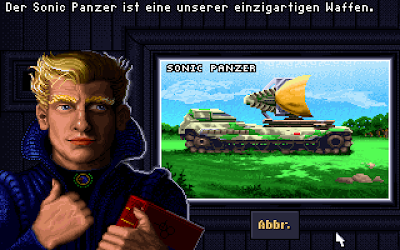 I just finished reading The Children of Dune by Frank Herbert. It's the third part of the epic Dune saga of five novels. I swear it is THE best science fiction ever written. There are also a number of prequels, sequels and interquels (new word for me!). I can definitely recommend reading the first five! Haven't got around to reading the new ones yet. 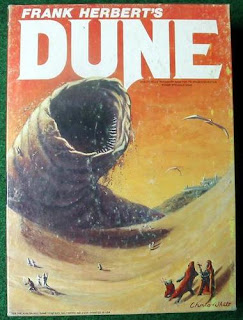 And low and behold there are aslo a few games based on the universe of which I have played Dune II. On of the first real-time strategy games similar to Command and Conquer or Warcraft I and II.

Anywho, what does this have to do with dermatology then? In the end of Children of Dune, Leto II, lets himself be covered in a leach like type of organism. They go all symbiotic on him and he ends up protected against the harsh desert, resistant to injuries and super strong :). So he get's like an extra skin/exoskeleton. Simple and clean, well not sure about the clean part.

Scientist have had trouble replicating our cool skin. I mean it protects us against heat, cold, dehydration, bacteria and mechanical injury and can heal by itself, which is in itself pretty sci fi. And not to forget it gives us the great sense of touch. If we could make new skin, imagine the benefits for all burn and trauma victims.

So, some scientists have come up with a fake-skin/polymer that is able to heal itself in matter of seconds, like Wolverine or assorted vampires can do. But opposed to our real skin the fake also conducts electricity very well, making it possible to use it to interface with electronic devices. Pretty cool. It could also register touch, which means that it could be used in prosthetics.

You can read more here: http://news.stanford.edu/news/2012/november/healing-plastic-skin-111112.html

Thomas
Stockholm, Sweden
I'm a Medical Student and dad residing in Sweden. This is a blog about my med school endeavours. A lot of it is going to be about computer games as well. Hopefully a combo! I am about to start the third year at The Karolinska Institute. If you like my posts, please comment. If you don't like them... go ahead anyway :)

If you have something to share on computer games and health, reviews of games, medical school, technology that helps you ace exams.
Please submit your guest post to tho.lee[at]gmail.com! I would love to have guest posts! :)

Links and other Blogs